Asthma vs COPD: What Is The Difference? 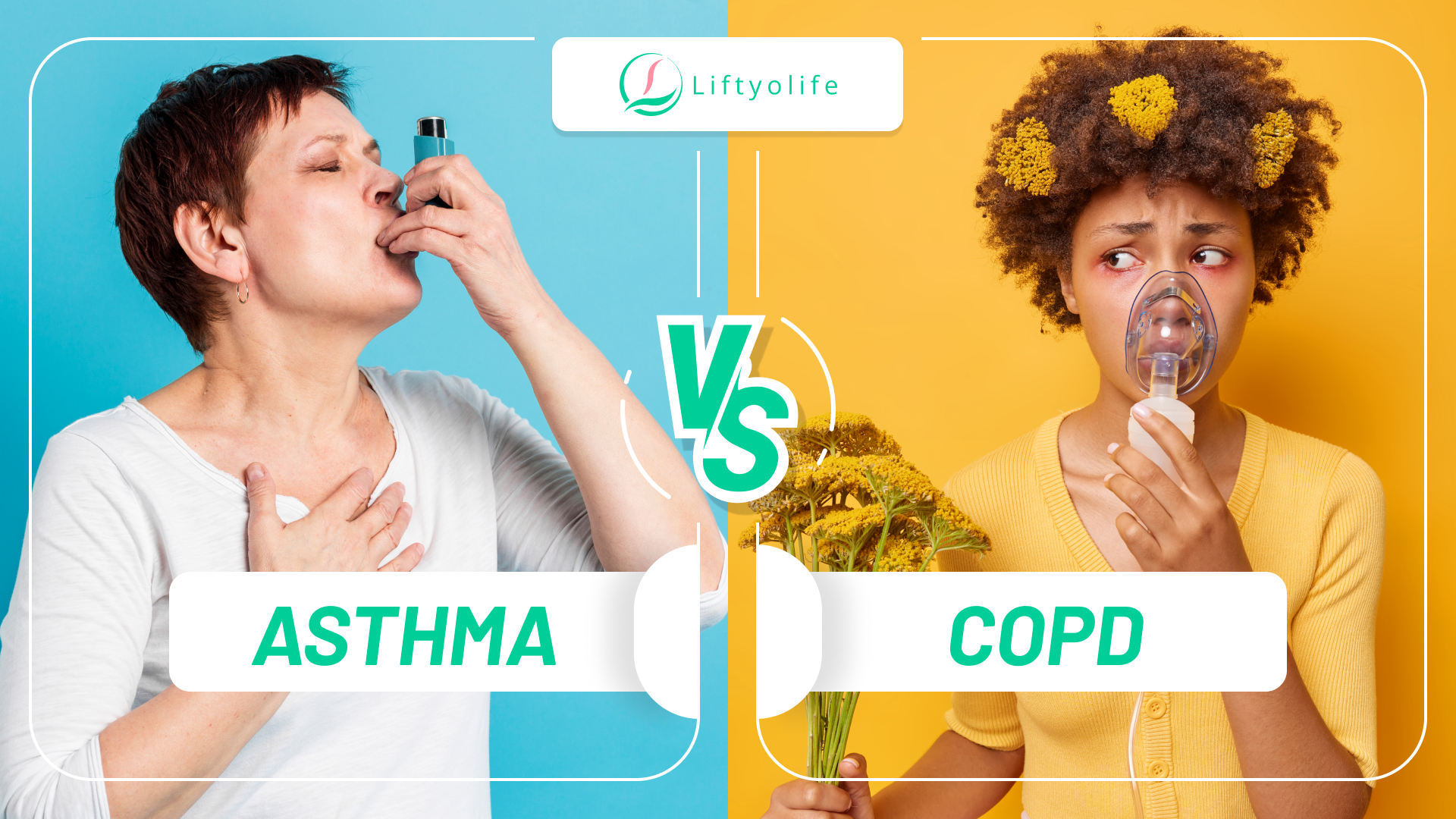 Asthma vs COPD: What is the difference? When a person suffering from asthma or COPD experiences shortness of breath or another symptom, they may not realize they have more than one chronic lung disease. According to the Global Initiative for Chronic Obstructive Lung Disease, 15 to 55% of patients, depending on gender and age, may have asthma-COPD overlap syndrome (ACOS). This disease includes elements of both asthma and COPD. Let’s follow Liftyolife (liftyolife.com) to get the first step into analyzing both disorders.

1. Definition of asthma vs COPD

COPD (chronic obstructive pulmonary disease) is a lung disease that is not fully reversible and is caused by chronic interference with lung airflow (1). COPD is also a progressive disease that makes breathing difficult. The term “progressive” refers to how the condition worsens over time (2). This is a common, preventable, and treatable chronic lung disease that affects both men and women worldwide (3).

Asthma is a chronic (long-term) lung disease characterized by bronchial spasms, which occur when the air passages in the lungs narrow due to inflammation and tightening of the muscles surrounding the small airways. This can result in wheezing, coughing, and chest tightness. When these symptoms worsen, it is referred to as an asthma attack or flare-up (5). Furthermore, these symptoms are sporadic and are frequently worse at night or during exercise (4).

2. Causes of asthma vs COPD

Long-term exposure to lung irritants, thereby damaging lung cells, causes COPD. Cigarette smoke is the leading cause of COPD in the United States, followed by other tobacco smoke (including secondhand smoke). Other potential causes of COPD include chemical or toxic fumes and inherited (genetic) factors such as alpha-1 antitrypsin deficiency, but these are far less common than cigarette smoking.

Although cigarette smoke may cause asthma in some patients, asthma triggers vary from person to person. The most common include airborne substances such as pollen, dust, mites, mold spores, pet dander, and various other substances. The leading cause of asthma is inflammatory immune reactions to asthma triggers in the airways.

3. Symptoms and signs of asthma vs COPD 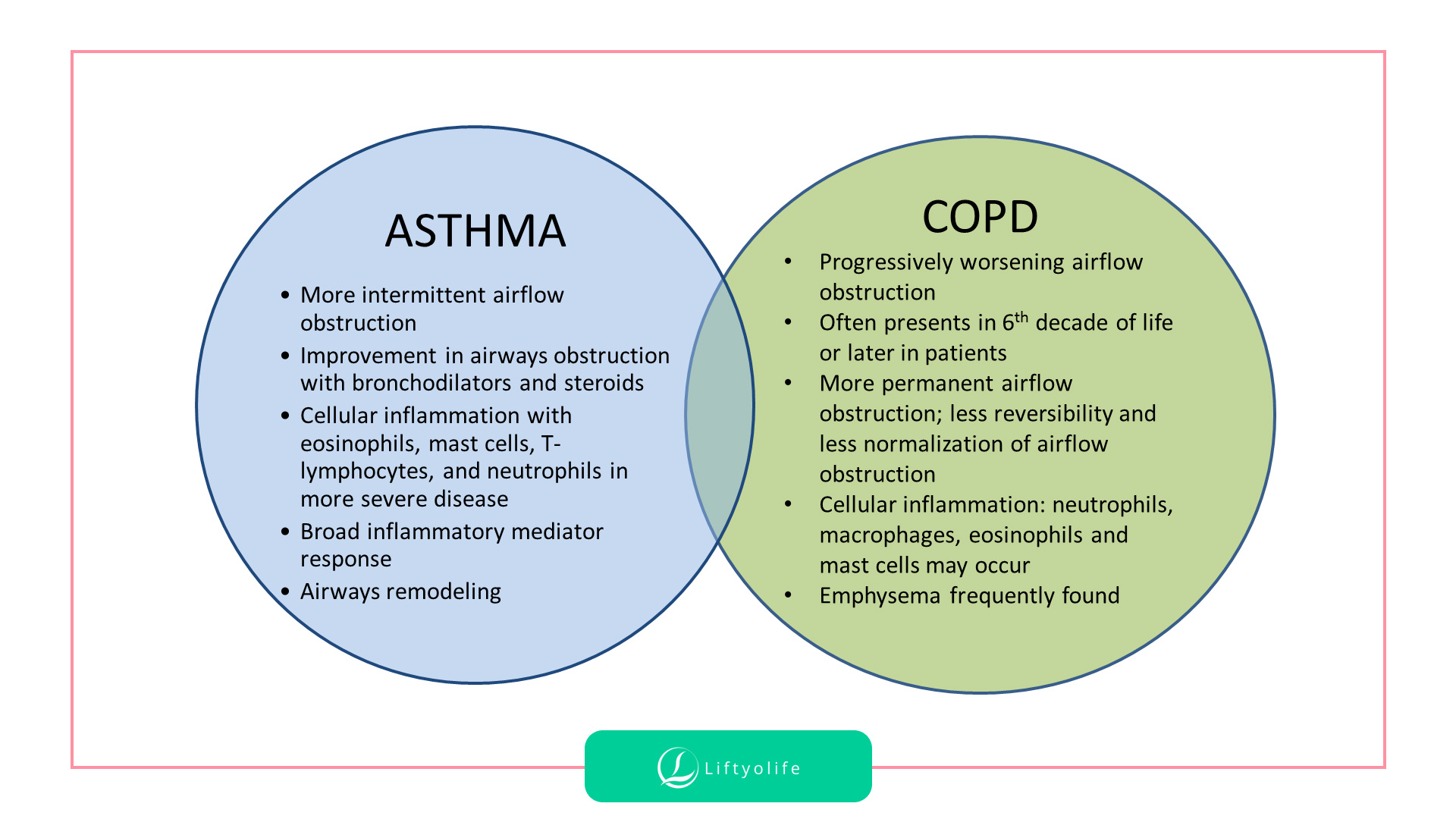 Symptoms and signs of asthma vs COPD

3.1. Similarities symptoms and signs between COPD vs. asthma

The following are similarities in signs and symptoms between the two conditions:

3.2. Differences symptoms and signs between COPD vs. asthma

Breathing in asthma can return to normal between attacks, whereas breathing in COPD rarely returns to normal.

There are numerous treatment options and methods for managing COPD. The most recent 2017 guidelines emphasize using combined bronchodilators as first-line COPD treatment. Vaccinations are recommended for people with the condition to reduce the risk of lower respiratory tract infections. Changes in health-related behaviors (such as quitting smoking) are emphasized. Spirometry measurements can aid in the diagnosis of obstructive lung disease. As your COPD worsens, oxygen therapy, especially if you have obstructive sleep apnea, may help you live longer.

As with COPD, there are numerous treatment options and methods for managing asthma. Corticosteroids, short-acting beta-agonists (such as albuterol, Proventil, and other brand names), and anticholinergic medications are sometimes used to treat severe exacerbations. Your primary care physician and an allergist will discuss and recommend the best treatment and management drugs for you. 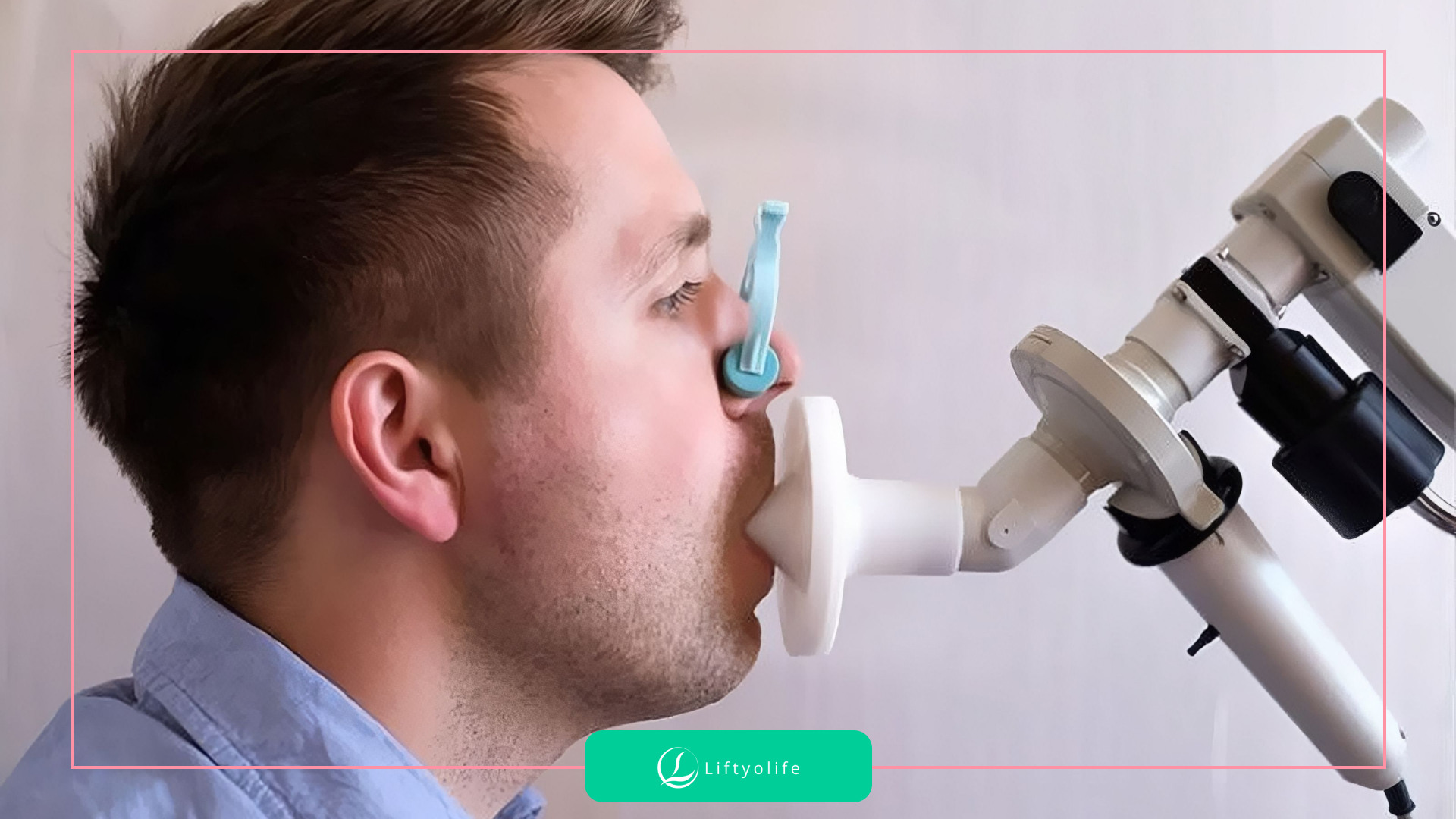 You and your allergist may need to experiment with various medications to find the most effective treatment for your condition. Doctors will occasionally prescribe long-acting anticholinergic medications (for example, salmeterol [Serevent] and formoterol [Foradil]), corticosteroids, and other drug combinations for the long-term treatment and management of asthma. If you have become desensitized to specific asthma triggers, your doctor may recommend allergy shots (immunotherapy).

In case of a life-threatening asthma attack or COPD attack, emergency treatment may include intravenous corticosteroids, intubation, mechanical ventilation, and oxygen therapy until the crisis is resolved.

With asthma, the swelling is frequently triggered by something you are allergic to and usually gets better because symptoms can come and go, and you are symptom-free for a long time. Meanwhile, COPD develops when the tiny sacs in your lungs (known as alveoli) become damaged, and COPD symptoms persist and worsen over time, even with treatment.

Both asthma and COPD are fatal lung diseases that hurt your lungs. Predict everything and avoid asthma or COPD attacks by being cautious and well-prepared before the change of seasons. Let’s dial 911 if you have trouble breathing or have any other severe symptoms. Liftyolife (liftyolife.com) will provide you with an authentic source of healthcare guidelines, allowing us to become your companion. 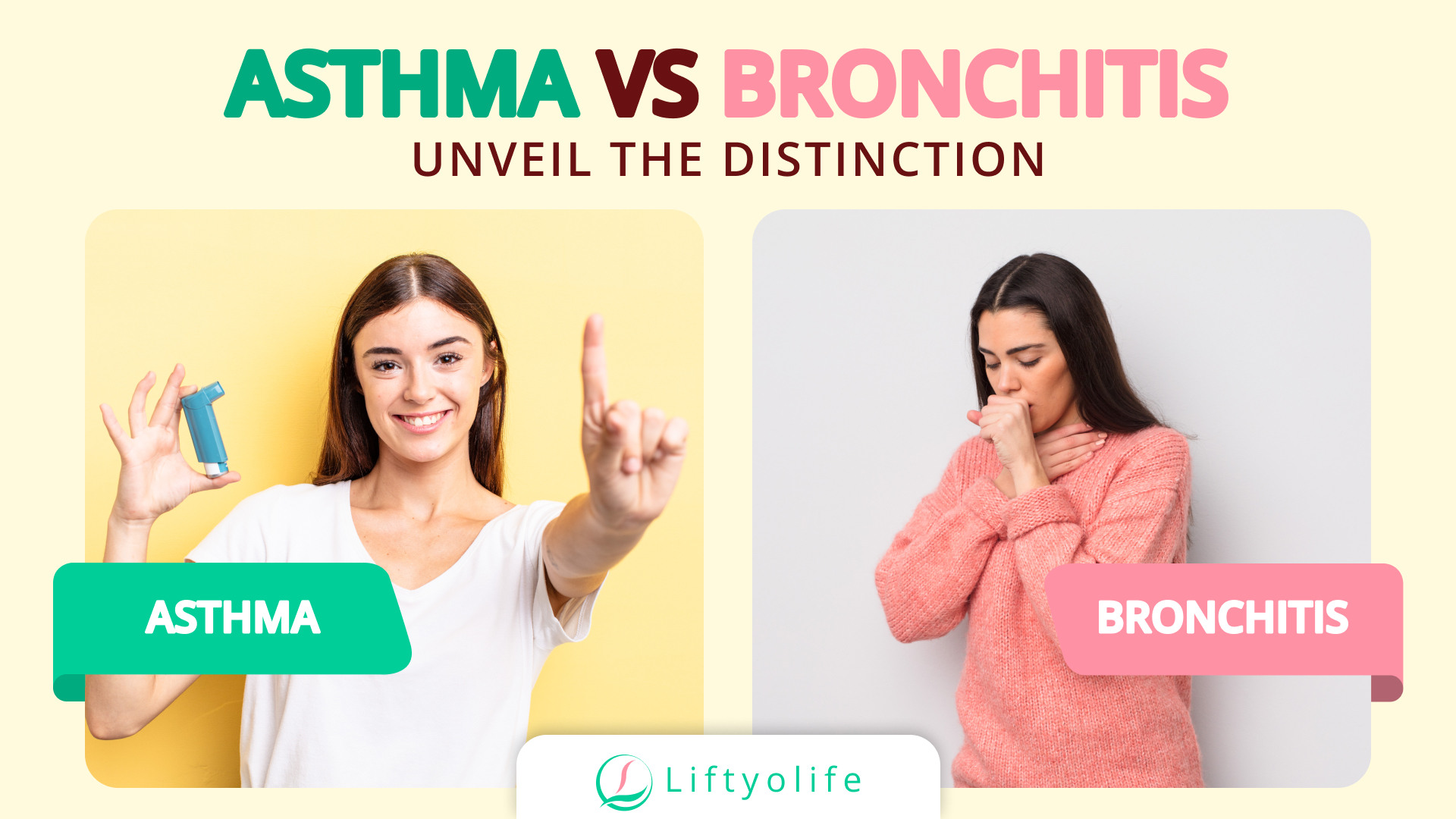 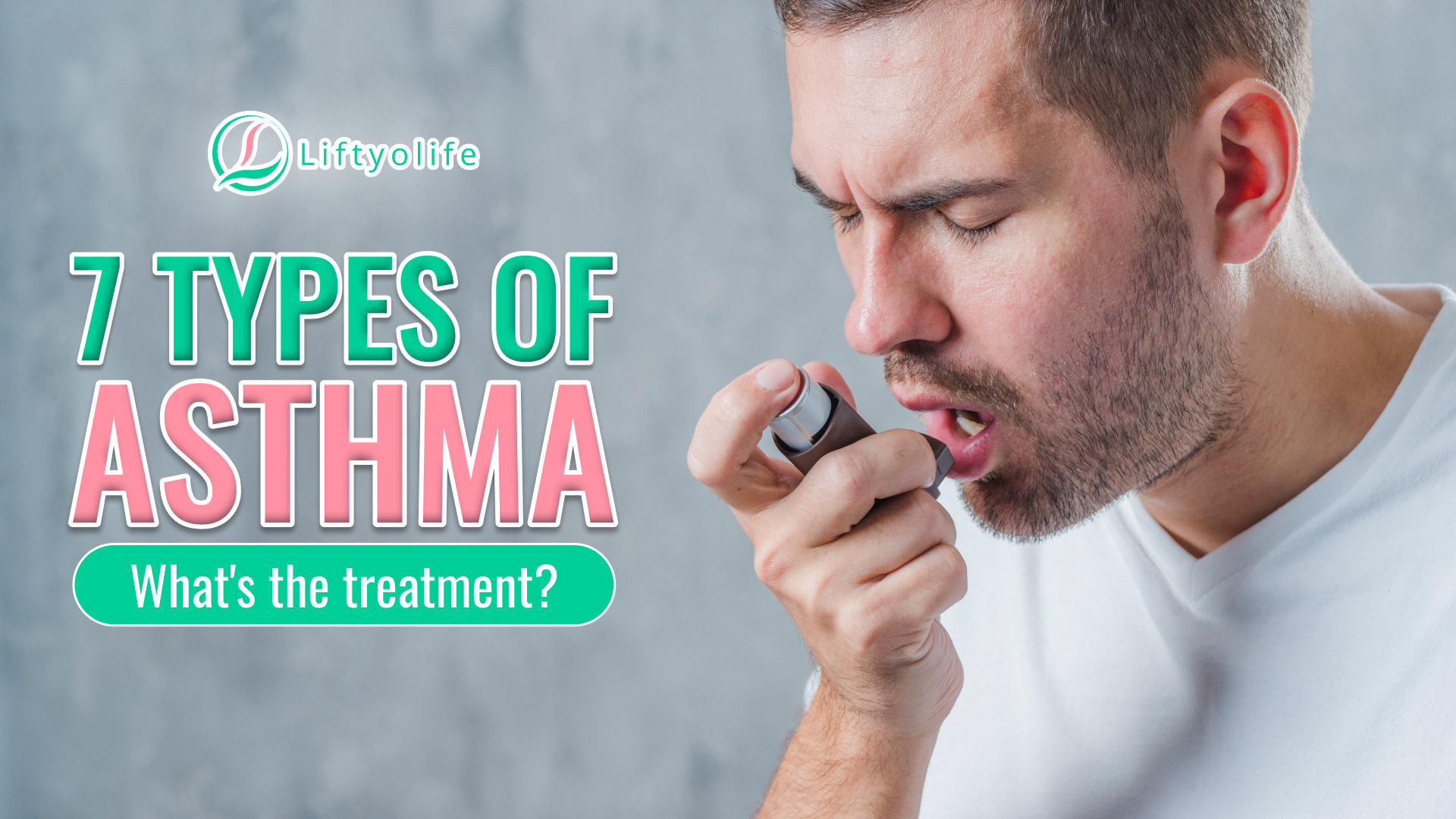 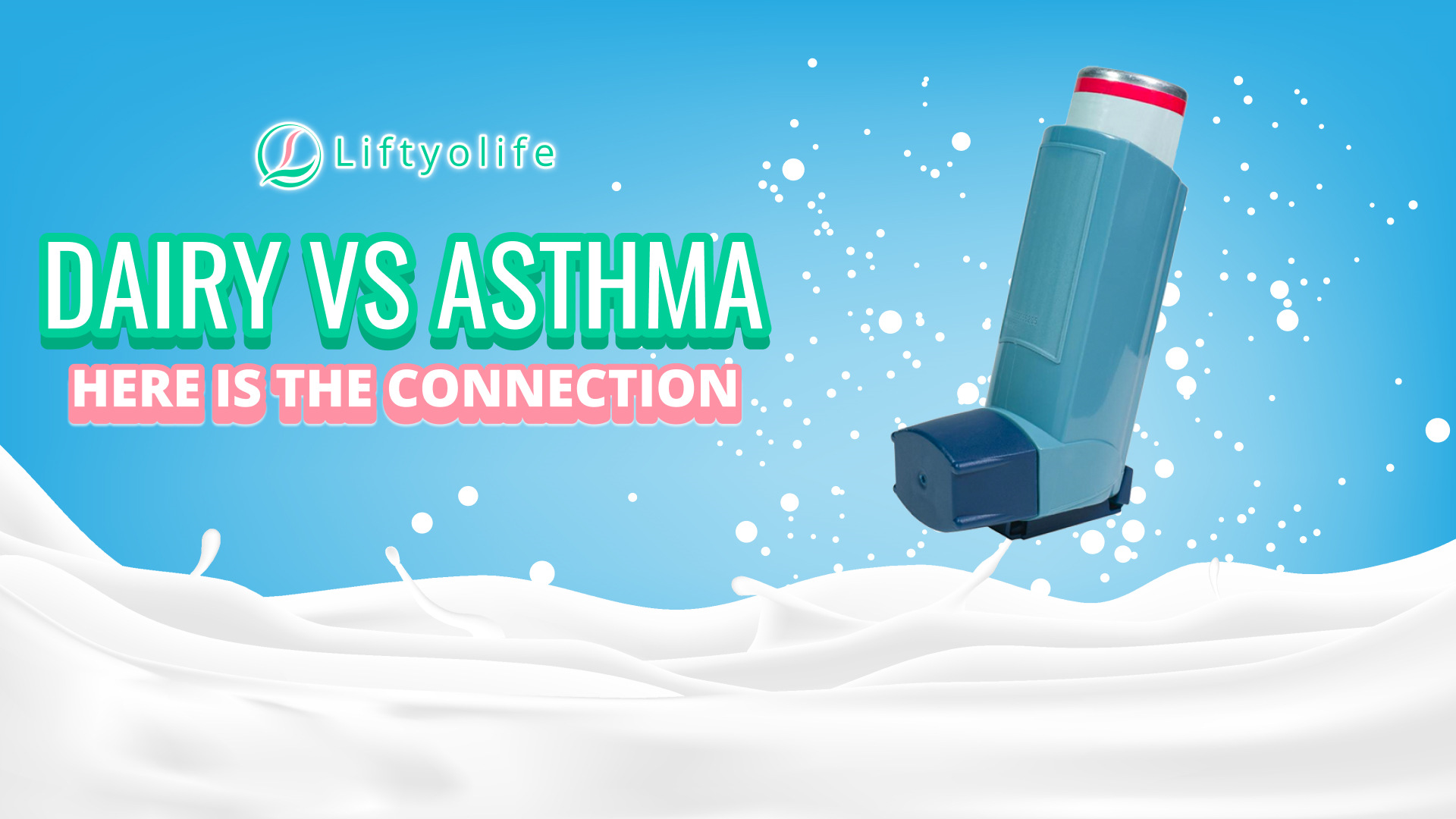